A Home for Nature. Or, How to Frustrate a Stoat.

I have a number of bird nest boxes scattered around the farm. There is an enormous nesting box for the resident Tawny Owl which took two of us several hours to mount in the roof of a barn and which he has studiously ignored for the last two years - preferring to sit on a cross-beam about 6 feet away from the custom-designed super owl-hotel, and watch me with irritation every time I walk through. Otherwise there are some standard nesting boxes on trees etc designed for the specific birds which inhabit the locations in the spring.

Luckily these have been more successful with Blackbirds, Blue Tits, and Swallows as well as Sparrows being frequent (and verbal) residents. With one particular occupied box I was determined to get a shot of the Blue Tit emerging from the hole, and set up camp on a chair at that end of the garden, well wrapped up 'cause it was cold, and about 12 feet or so away from the box, and waited.

I had no luck with the bird but after about 15 minutes this fellow showed up. 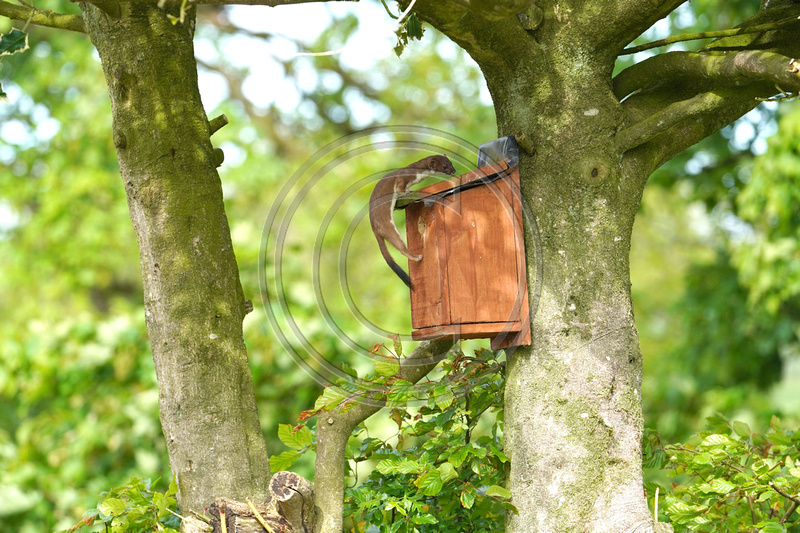 This is a Stoat (Mustela Erminea). Fairly common in the UK, not so common here unless there happens to be a surplus of rabbits for lunch. He had a good go at getting into the nesting box as there were young Blue Tits inside, but with the hole cut at around 25mm diameter he found it a bit of a struggle 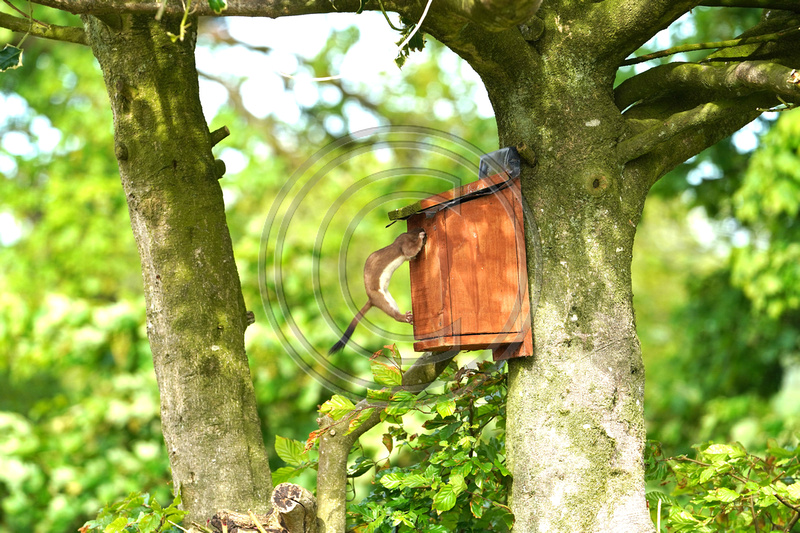 In went the head for a good look 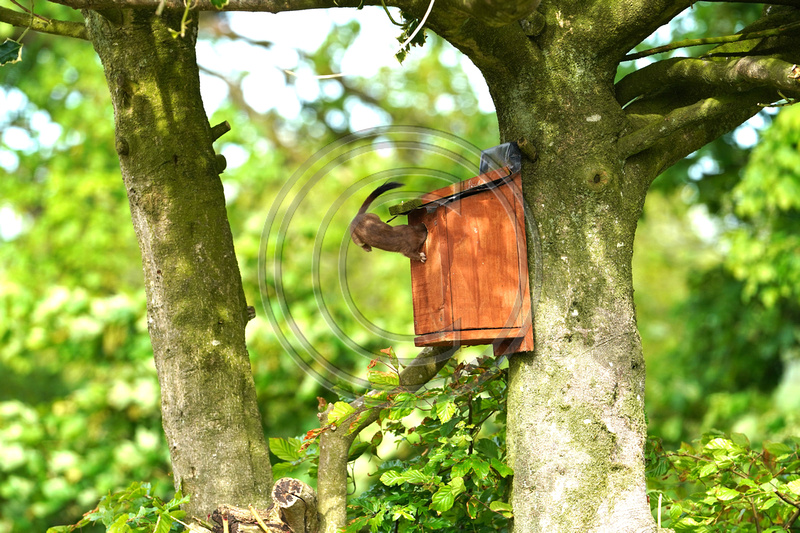 but despite some swaying backwards and forwards the shoulders were just too much. 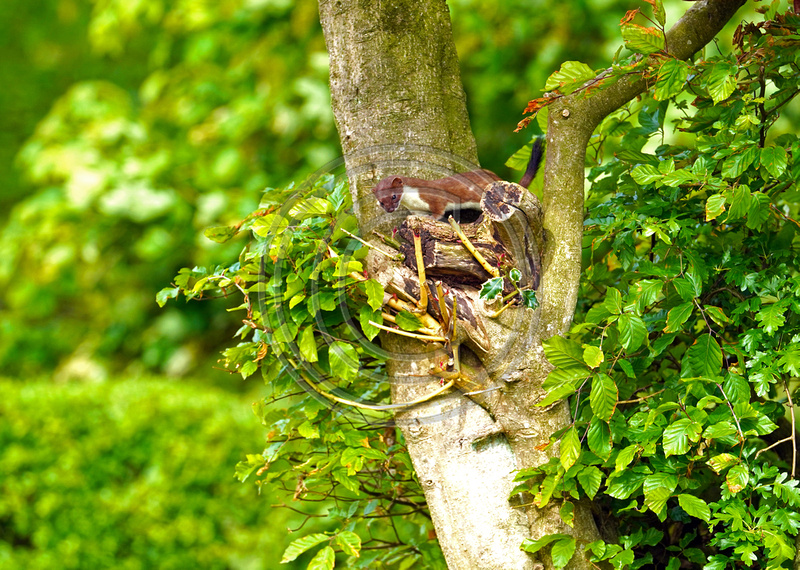 I give up. Still no shot of the Blue Tits though.

Deep in the Woods 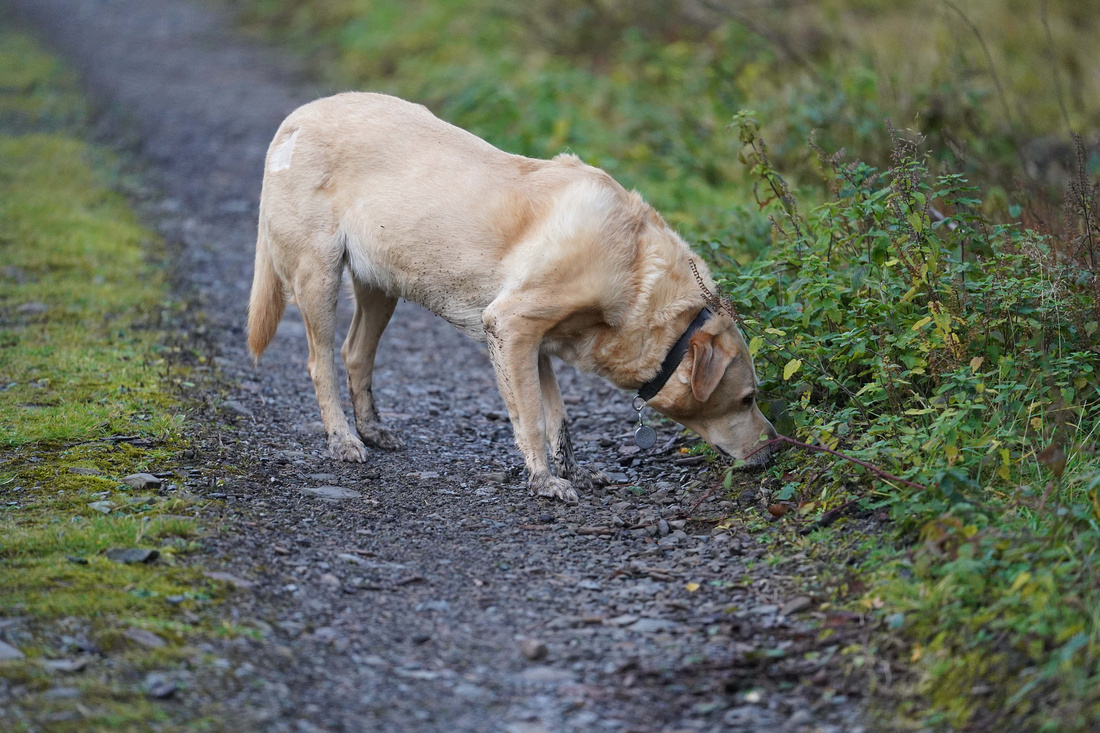 Sniffing out the Deer

The difficulty in getting up early in the morning (besides actually getting up) is that it is dark, cold and wet, especially this time of the year, in Scotland. Also, for a photographer, there tends to be a lack of light. Which can be a bit of a snag. Deep in the woods, where my pal Jack tends to go, the light really does present challenges. Once he picks up the smell of a deer, fox or other unseen furry inhabitant of the local plantation he can be off in an instant. Sneaking up on wildlife even when it is quiet can be a challenge when Jack the Lab is thirty steps ahead of you with his nose pressed to the ground. I did manage this one recently though. 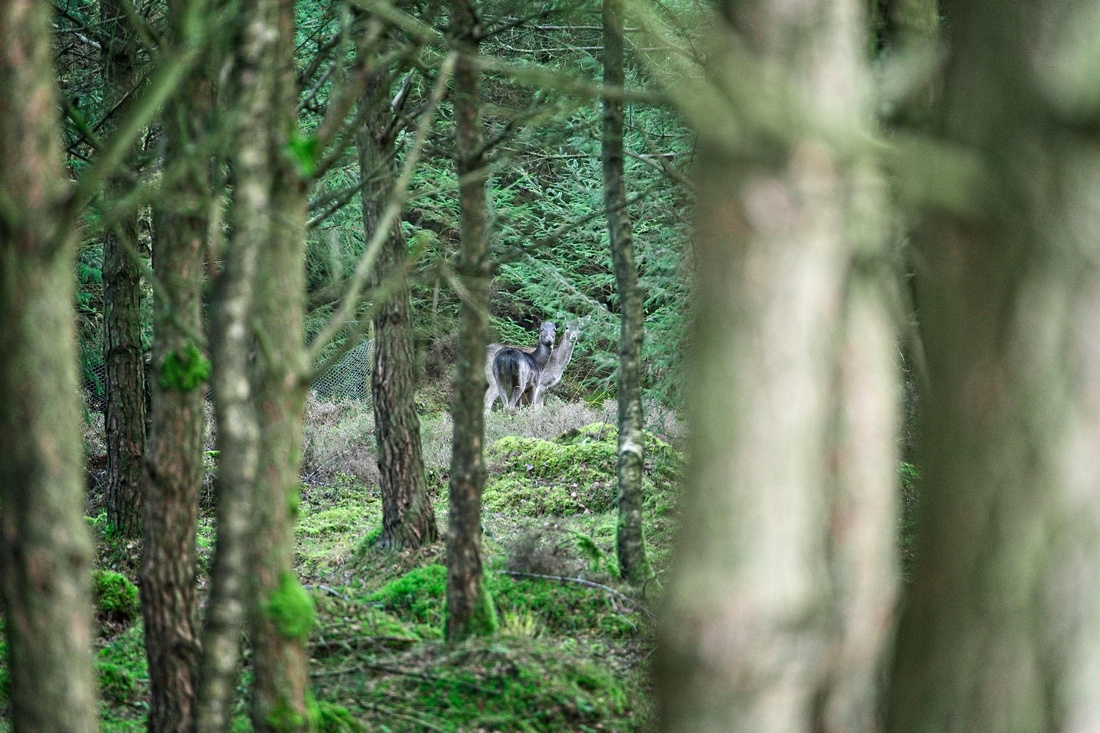 Not a brilliant photo I admit, but the best I could get on the day. I always have my camera set according to the expected light conditions before I leave the car, and for the woods a high ISO ready just in case, with maximum focal length for the lens, aperture priority and wide open, and keep an eye on my shutter speed. For the photographers out there is was taken on a Sony A7M3, FE 70-200 F2.8 GM at 186mm with some manual focus to avoid the trees, and F2.8. ISO 4000, and 1/250sec.

Regular followers of my Blog will note that I have been a bit quiet for a while. I have been busier of late and have had a full change of gear from Canon to Sony, necessitating not only change of camera (s) and lenses but the other stuff of photography such as flash, studio flash, triggers, and other stuff you don't think of when you have used Canon without thinking, for decades. I'll cover the change later, when there is (another) rainy day, and I feel another Blog coming on.

Too early in Scotland

For someone not especially into wildlife photography I do seem to concentrate on the subject a fair bit. Maybe it's because I keep bumping into creatures with four legs, or a beak. If you stay still long enough in rural Scotland you tend to get something snuffling around you in the long grass, and if you are lucky enough your camera is pointing the right way, and is switched on. Most of the time, when you have a Labrador walking ahead of you it is difficult to take wildlife by surprise, as anything ahead is normally up and off hotly pursued by my buddy Jack before you manage to even get around the bend in the track. Sometimes, you can get lucky - sort of. 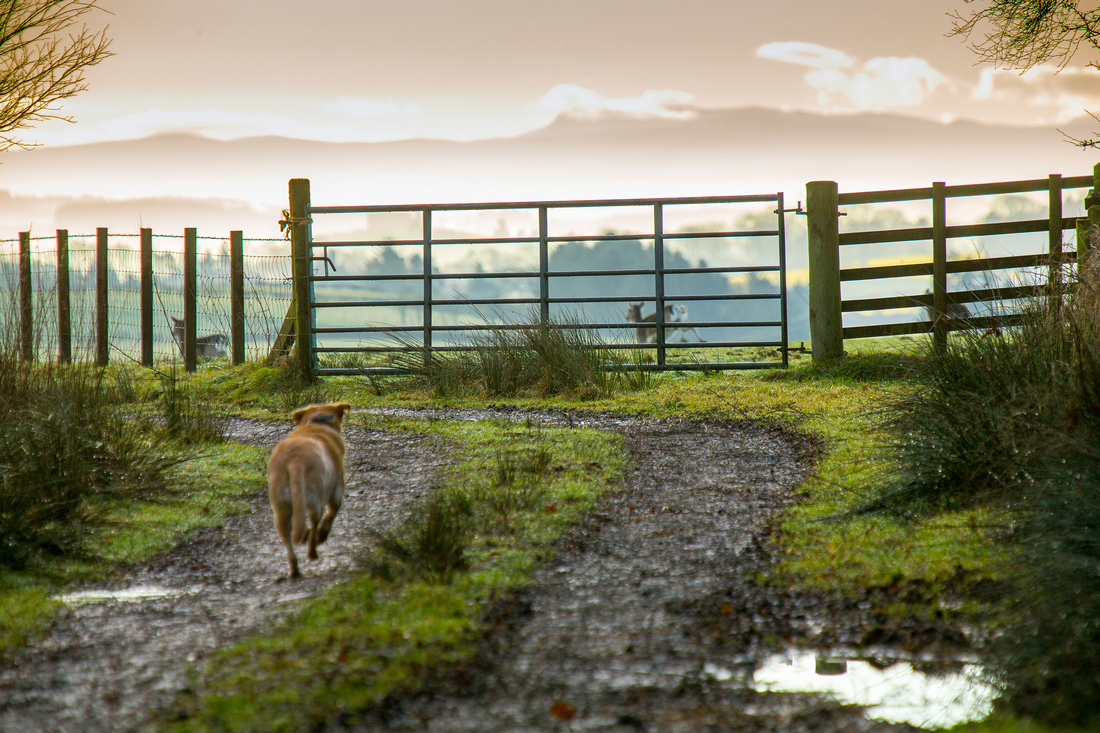 This photo is a prime example. Half a dozen deer in the field, a whiff of the air, and the Lab is off! Autofocus didn't stand a chance. Got a sharp shot of the gate though. 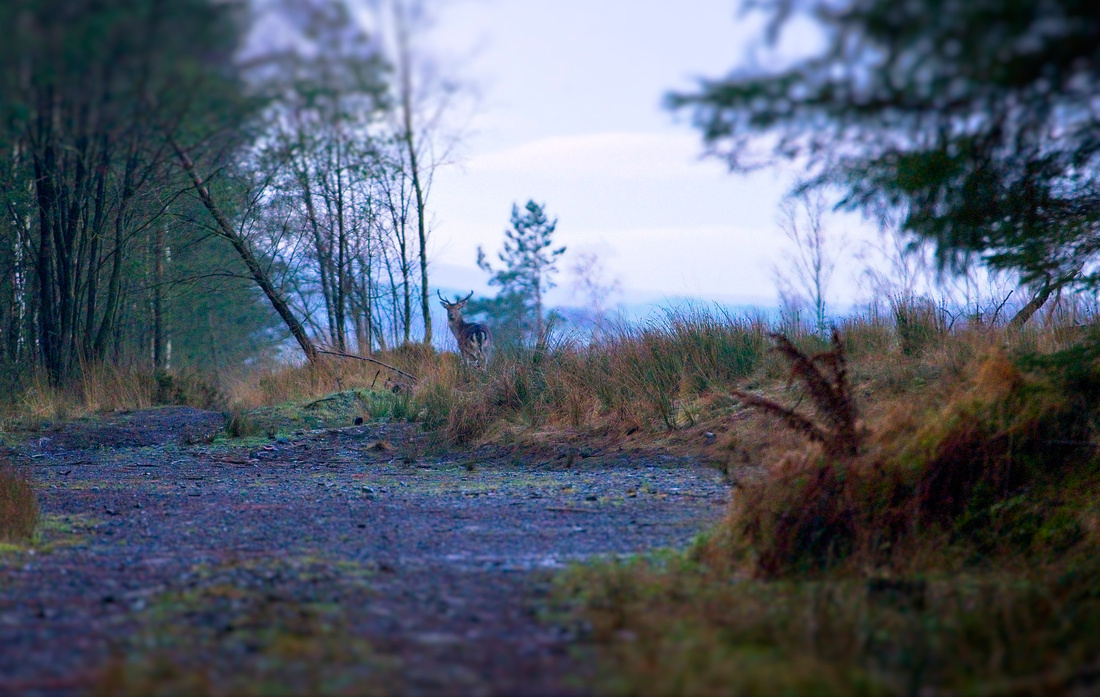 Another case in point. Jack was poking around in the trees behind me following an early morning smell but with the wind behind me there was still no chance of sneaking up closer to this guy. Perhaps I need to get up even earlier in the morning, but lack the will. 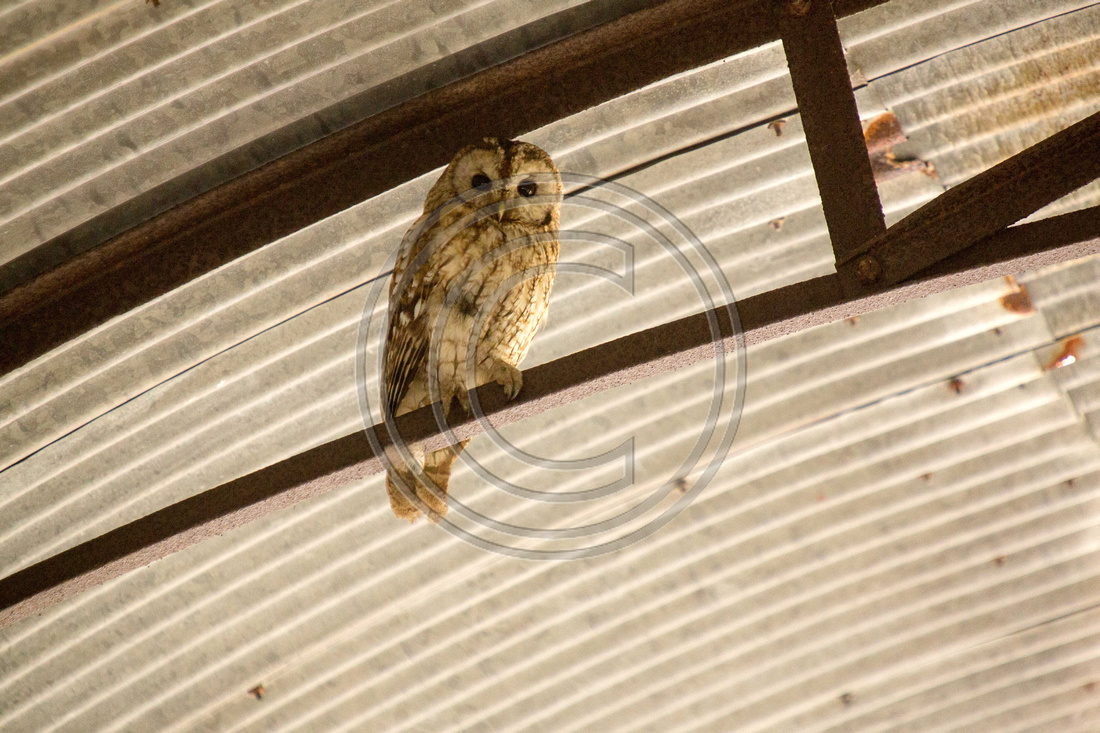 Was it as long ago as September 2015 that I wrote about my resident Tawny Owl? It appeared that he had moved on to pastures new as I had not seen him for quite some time. I do have a range of buildings here on the farm and was surprised to see him perched high up on the frame of a tin roofed barn a couple of  weeks ago. It would be nice to think he is the same guy. Putting all barn activity on hold for a while to encourage him to stay seems to have worked to a certain extent. He was quite happy to watch me bob my head in and out of the barn end the other day as I fired off a few shots on the Canon 5D 111, fitted with a 400mm lens, and was still there in the afternoon.

A few days later he was up there and I needed to drive a bit of machinery in to pick up some heavy items. He watched me for a good while and stayed put. Later on I ventured in again for another pickup and he flew to the far end, planted his feet, and kept a beady eye open for a smidgen longer, and then vamoosed through a gap. I now have a owl box (hotel) in place high up in the beams. I think a camera up inside will be next. More later.

Living in the countryside as I do, the commonly used phrase "giving nature a home" seems ironic as nature seems to attack me every time I venture out the front door. House Martins, Buzzards, Deer, foxes and owls seem to do especially well here at various times of the year. Memories of being constantly pecked on the head while photographing Artic Terns on the Farne Islands springs to mind. Mind you, my shot of the Longstone Lighthouse on that day appeared in the Trinity House calendar a couple of years ago. But I digress. 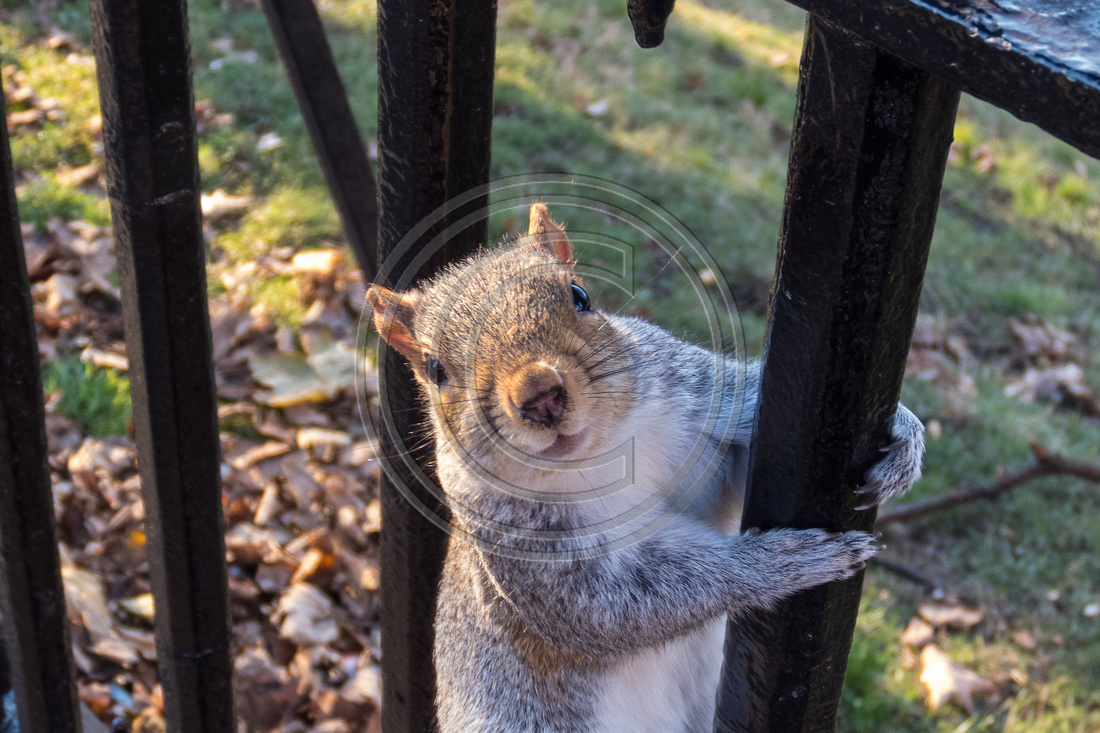 It's a question of Attitude

We are not short of squirrels around here, especially in the Eskrigg Nature Reserve in Lockerbie. Usually, my efforts to photograph them purely as an amateur wildlife photographer usually result in a red backside vanishing behind a leaf, or a perfect shot of a tree stump where only a few seconds earlier something cute was munching on something indefinable.

Occasionally, a trip to the city can give you a break from things that chirp, squeak, or make peculiar coughing noises in the middle of the night. Or so I thought. Straight out of the railway station in Edinburgh I met a squirrel with attitude. Far from vanishing in the flick of a tail he came right up and fixed me with a beady stare. I think he was trying to assess whether I had a sandwich. Luckily the camera was switched on. (the Fujifilm S1 has survived as my pocket camera - see previous blogs). He posed to make sure I got the shot, decided I had no food, then bogged off. Mercenary. Next time I go to Eskrigg, I'll pop into Greggs first.

« Older Posts
Subscribe
RSS
Recent Posts
A Home for Nature. Or, How to Frustrate a Stoat. Deep in the Woods Too early in Scotland I'll be Back Living with Nature Have I bridged the gap? Not sure... Bridging the Gap Talk to the animals (and birds) Selected for the 2016 calendar for Trinity House Not a natural
Keywords
photography morris steve lockerbie scotland dog Northumberland bird nature photographer
Archive
January February March April May June July August September October November December
© Steve Morris Photography
User Agreement
Cancel
Continue