Have I bridged the gap? Not sure...

Having played around a bit with the FujiFinepix S1 I am unconvinced that this is for me. The first irritant was the lack of a proper manual. These on-line things are all very well but you aren't able to just pick up the on-line guide and browse through it over a cup of tea, or dog-ear the edge of the page if you read something interesting. If you happen to be under a bush trying to alter your ISO whilst deciding which "mode" suits the fast moving woodpecker best ( see shots further down this blog) an on-line manual stands no chance. To be frank, a paper manual stands little chance either as the bird will be gone by the time a read the thing - but it does demonstrate my personal preference. I find the various modes restrictive, and settings difficult to get right. As a confused experienced photographer I think less experienced users must struggle greatly, and simply revert to one of the automatic modes - that being another story, as they are not fully automatic as you might expect.

Enough rambling - here is a decent enough shot of a woodpecker taken at maximum zoom equivalent of 1200mm, at about 20 feet distance. 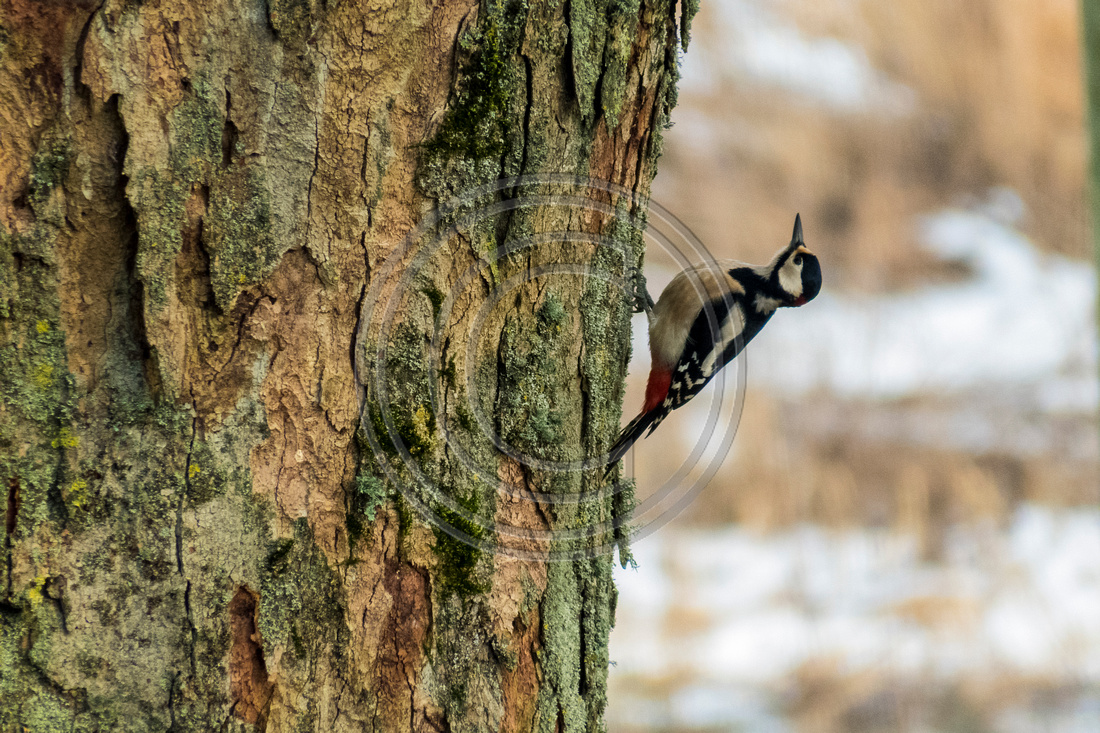 For the techies out there 1/125th second at f5.6, 1200mm, ISO 400, and rather "flat" light conditions as the snow was melting in the background. Hand rested on a support as at maximum zoom there is a fair bit of camera shake. This was taken in one of the preset modes suitable for moving subjects. Given that the max lens aperture is f2.8 and I focused on the tree itself I would have thought that the camera would have taken the shot at 1/250 or faster, increasing the ISO. It seems to be a characteristic of the camera that modes do not automatically alter the ISO as well as the aperture / shutter speed to suit light conditions when supposedly operating in a semi-automatic mode. Also, continuous shutter firing does not seem to be available when shooting in RAW or anything other than one of the lower resolution file formats such as standard JPG. They don't tell you that in the sales info. You have to wait for the camera to process the shot before taking the next one. Not good. and yes, I use a very fast memory card. There is also a firmware fault. In manual settings, the software display tells me I am setting my aperture, but it is the shutter speed which alters, vice versa when trying to set a manual shutter speed. Not the kind of fault which should get passed beta testing. (apologies for using semi-technical terms. If you understand them, fine. if you don't, you are probably  better off).

I wonder if I expect too much. Enough grumps. I shall try and be more positive in my next review. Current score 4/10. More later.

No comments posted.
Loading...
Subscribe
RSS
Recent Posts
A Home for Nature. Or, How to Frustrate a Stoat. Deep in the Woods Too early in Scotland I'll be Back Living with Nature Have I bridged the gap? Not sure... Bridging the Gap Talk to the animals (and birds) Selected for the 2016 calendar for Trinity House Not a natural
Keywords
photography morris steve lockerbie scotland dog Northumberland bird nature photographer
Archive
January February March April May June July August September October November December
© Steve Morris Photography
User Agreement
Cancel
Continue